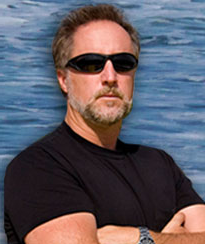 Tres Martin was born on November 20th 1963 in Baton Rouge, LA. He is the oldest of a family of three children. His parents, Ralph Martin Jr. and Katherine Dianne Martin moved to Fort Lauderdale when Tres was only two years old. As a child Tres always had a drive for competition. He was a bicycle dare devil and jumped into bicycle motocross where he built and raced his own bike with much success with podium finishes. At age fourteen Tres started working for Everglades Marina, a very well established business in Fort Lauderdale owned by his father Ralph Martin Jr. From mopping floors to cleaning boats Tres learned every aspect of the marine business. He became a certified marine technician and was promoted to Service Manager in a very short time. He then convinced Everglades Marina to start up a customizing and race shop to attract more performance boats enthusiasts and a was a success.

Due to Tres’s knowledge and expertise he has been contracted to start building and designing boats including Championship class race boats for private clients and manufacturers through out the years. Many of these boats were very successful and well known on the National Racing Circuit. Some of the clients he built boats for are Cigarette Racing and Dragon Powerboats.

One of Tres obsession with boats is Hydro Dynamic’s Principal’s and Theory’s, as well as Navel Architectural Design, and Product Integration. This is a daily ongoing process that began in the late 1980’s. Continual testing and documentation leads to further advancement in the industry. Tres spent several years testing manufactures/clients race boats at the once famous Lake X. Tres continues to do this today for private clients and manufactures.

After 16 years of dedication Tres resigned from Everglades Marina and started his own company “Martin Offshore Inc.” The business was very successful as Tres is very dedicated to his customers who  rely on his knowledge and reputation. Each boat that comes to Martin Offshore receives Tres’s personal touch.

In 1999 he was approached by Cigarette factory about participating in a few races which were done successfully. In 2000 Tres was approached by one of his customers, “Todd Klindworth” to build a 38’ Cigarette named “TEAM VIRGIN” and in the following year a 36’ Gladiator and a 40’ MTI Catamaran . Both boats were raced back to back on the same day which labelled Todd and Tres the IRON MEN OF OFFSHORE.

In 2001 they won the National and World Title which led to both of them being inducted into the APBA Hall of Fame Champions. Since 1986 totaling more than 66 checker flags, Tres has won 4 National and 4 World Championship Titles from Factory Class to Superboat. Throughout his career, Tres has always been in thetop 3 in National level in points and has been 3 times Throttleman of the Year. Tres brings this world class form to your everyday performance boat or performance boat school.

In late 2003 Tres Martin started what is known today as Tres Martin’s Performance Boat School. Due to the new technology of modern hull design many accidents were occurring and he felt compelled to step into this side of the industry to mitigate the risk. Today Tres has taught more than 1300 individuals, including NAVY Seals, Navel Special Warfare Services, US Coast Guard, Mercury Marine and other boat manufactures.

Due to his knowledge and expertise Tres is also a consultant for the marine industries and insurance companies as well as  for legal litigation. Over the years Tres has become very involved with powerboat safety and continues to do research and development on hull design and handling to provide safer on water hull use. 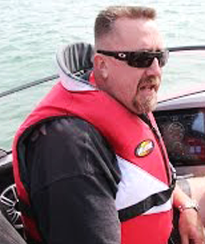 Originally from Spokane, Washington Brad Schoenwald is a lifelong boater who grew up running family boats on the lakes of Northern Idaho. Retiring from the U. S. Coast Guard but not from working, in 2007 after serving over 20 years, his assignments took him about as far as the Coast Guard could send him Brad, served aboard USCG Cutter Elderberry – Petersburg, Alaska, USCG Station Chetco River-Harbor Oregon, USCG Station St. Clair Shores-St. Clair Shores, Michigan, USCG Cutter Galveston Island-Apra Harbor Guam, Marine Safety Office San Juan-San Juan Puerto Rico, and most recently USCG Sector Miami, Prevention Operations-Miami Beach, Florida. Command positions include Executive Officer, USCG Cutter Point Bridge, Marina, Del Rey, California and Officer In Charge, USCG Station San Juan. In addition to his operational background Brad has an extensive background in instructional Technologies and Human Performance Technologies. The depth of this training and education resulted in Special Recognition for Inspirational Leadership at the Chief Petty Officer Academy in New London Connecticut. Brad writes for a variety of boating magazines and is frequently requested to speak during boating safely and human performance technologies conferences.

An experienced professional mariner Brad is Deck Watch Officer qualified, a National Motor Life Boat School and Coxswain “C” school graduate and maintains a 100 Ton Masters license. In additional to working with the Performance Boat School Brad is also on staff at the USCG Cruise Ship National Center of Expertise, where cruise ship inspectors from around the world are trained on complex systems, crew proficiency and performance as well as all the regulations governing the Cruise Industry.

Brad is a performance boat enthusiast and is often found riding his Twin Step Top Gun all over the U.S.

The most important aspect of operating any watercraft is how well the human performs.  The traditionalist in the industry is completely focused on the boats performance rather than the operator.  Speed never causes an incident; it merely dictates the severity of consequence.  Humans can fail at slow speed and get away with it; the same failure at higher speeds will of course result in a much different outcome.

We offer the only training program that provides the proper skill competencies and then verifies each student attains a prescribed minimum level of proficiency before being awarded a completion certificate.
Stay Safe. 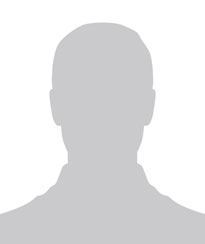 Strategic, with 20+ experience in operational maritime training development, asset/vendor collaboration management, logistical planning, and risk mitigation and hands-on and virtual training management. Recognized for goal-oriented professionalism by developing and implementing training curriculums that was formed from old and new ideas and resources which lowered equipment